Combine harvesters PALESSE took part in the parade held in Minsk on May 9, 2015 to commemorate the 70th anniversary of Victory in the Great Patriotic War 1941-1945. 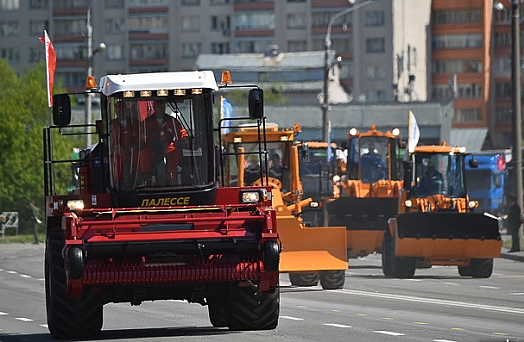 Belarus has become a tradition to stage in the days of the most important national holidays, together with military parades, also parades of civil self-propelled machinery. They involve the best products of leading Belarusian manufacturers.

PALESSE GS16 is new high-performance model which after the production development should take the top step of the lineup.

PALESSE GS12A-1 was shown in Belarus at first. The presentation of this modification of the well-known combine PALESSE GS12 took place in October last year at the Moscow exhibition "Agrosalon".  Among advantages of the combine - new design, dust removal system from running header and other innovative solutions.

Combine harvesters PALESSE in column of civil machinery can watch about 600 thousand of metropolitans and guests of the capital, many television viewers and internet users.

PLANT OF FOUNDRY AND FASTENERS: QUALITY CONFIRMED ON A HIGH LEVEL